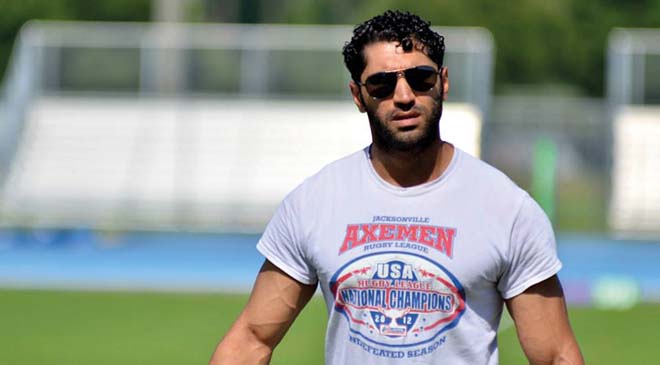 “People were getting taken away, captured and killed for no good reason. My fiancé was one of them. I tried to escape Iraq the way you see immigrants, just jumping on a boat and get out of there, but it didn’t work.”

Imagine surviving multiple wars, the death of your loved ones, destruction of all you know and then finally, finding redemption through Rugby League. It sounds like a movie script. For Saif Kareem it is real life. We’re pleased and proud to bring you his incredible true story, in his own words.

I always like to build the idea when people first talk to me of how old I am. Because I have two birthdays, one is on 19th January, which I consider to be my ninth birthday. But my actual birthday is October 9th, and I’m 36-years-old, but I spent 27 of those in war and violence. I arrived in the United States in 2010. But I couldn’t enjoy it when I first got here. I was getting invited to parties, and watching the TV, but I couldn’t comprehend the freedom. I was crying every day and night. I couldn’t enjoy anything, I just came from war and my brain was going crazy.
In a weird way, it was painful to have so much freedom. I needed something to keep me busy. I’d grown up loving a few things: theatre, art, photography and soccer. I joined the University of North Florida to study art and I decided to find a soccer team.
That’s when I met my rugby union team in college, because there was no soccer team. I’d never heard of rugby before. I saw the contact, the bit of violence and the team camaraderie and I was sold. Coming from the army, this is what I was missing.
I became a big part of the team once I learned the game and we reached the final of the National Championship. Once I left college there was no city team for men, only one at college. So that’s when I was pushed towards Jacksonville Axemen Rugby League.
We won the National Championship together and I also captained and was named MVP of the minor league team Jacksonville Hatchets. But, much more than that, it was the first time since I left Iraq that I felt like I belonged. On the rugby field, people don’t care about where you’re from or anything like that. They just want to win together as a team and be the best they can be. Everyone’s individual problems just weren’t relevant.
I loved it. Rugby really gave me my life. I started going back to the gym, getting into bodybuilding, and enjoying my life again. I started taking pictures at games and then other photographers told me I looked good and got me into modelling. Things just started to fall into place for me and it was through rugby.
When I was at a game one day, there was a scout coming down because I was applying to Orlando College for a scholarship and they were coming to watch me. After the game, someone came up to me and started asking me questions about my life.
I thought it was the scout. It wasn’t. It was a local reporter from the Florida Times Union. He then wrote a piece about me and it went viral, locally. I still had no idea about this, people were asking about my story. I still thought he was a scout from the college.
People were approaching me about it and that kindness rekindled my desire to live properly and integrate into society. It was built in my system not to trust people, but I started to share my life with people. People started to notice me now, and the modelling agency that I met through photographers started to put me up for acting gigs. They started to submit me for little jobs as extras. I was in CSI Miami, sitting on a table drinking coffee, for $100.
Watching big actors. Live, like a theatre. But, I’m in it. This was only a few years after I couldn’t even turn on the TV because it was too much of a culture shock. I felt a real love again. In Iraq, I grew up with theatre because it was seen as high culture because we had no electricity.
After that I kept getting more and more jobs. I grew to eventually getting awards at film festivals and I wasn’t even intending to go into acting. I came to the US to escape war. My life began to get crazy at this point.
I decided to make my own film production company and that’s my main focus now. I started to shoot a few clips of the Jacksonville Axemen just for the practice, and I was also injured because of my ACL, then the coach Sean Rutgerson was named USA coach.
Then he invited me to come along and film the team in the World Cup qualifying stages against Jamaica, which obviously they lost but it was a huge story anyway. I filmed nine days of footage, just to put it together for myself. But, the idea developed for me. This can be a feature film. It fell in my hands.
I just needed a platform for it. Then I got a phone call almost a few days later from an Indian director called Sourav Chakraborty who is Netflix enlisted. He got my number through an actor friend, he approached me as a producer to produce his first project in America under my own production company, TriStallion LLC Productions, to be involved. You can imagine at this point I couldn’t believe it.
We’re now in pre-production for a film called ‘To Whom It May Concern’ which is an adaptation of a novel about an anti-immigration activist who finds out he’s an immigrant himself and is targeting a long list of international prestigious festivals such as Cannes and Sundance, before aiming to maybe releasing it to the public on accessible platforms such as Netflix and Premier Video, and we’re hoping to crack the UK.
We’re in the planning stages of the film about Jacksonville too. It would be a beautiful ending to my story, to put together all my loves. Rugby, film and acting. And I owe it to rugby, because without it, I would have never escaped the pain from the life that I left nine years ago. Rugby League World is published every month throughout the year in the UK and is widely available in newsagents across the country. It is also available by post on subscription worldwide or to read online on desktop computers, smartphones and tablet devices at www.totalrl.com/rlw