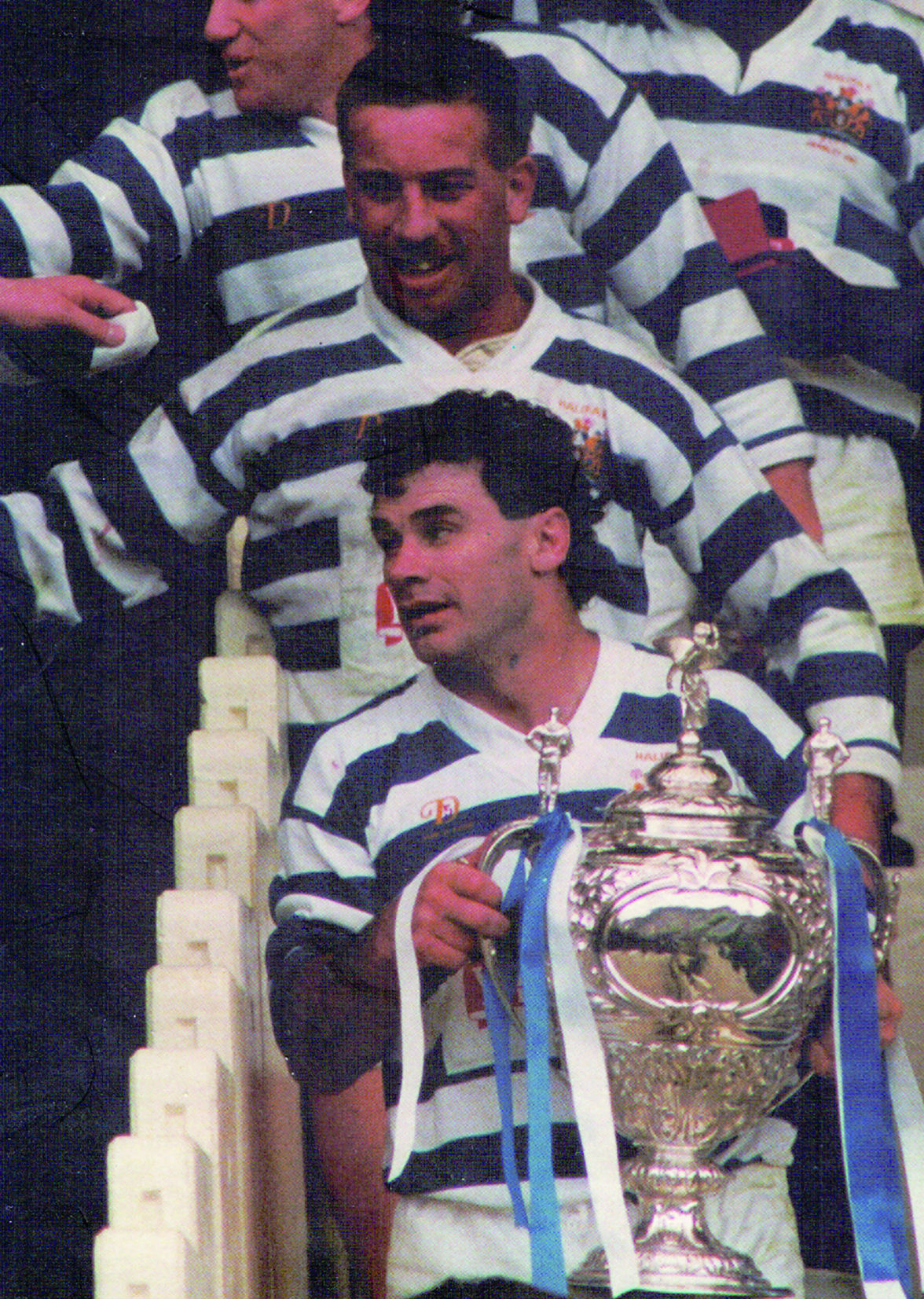 Rugby League World’s Time Machine takes a trip back thirty years to 1987 when Halifax were at the peak of their powers, winning a memorable Challenge Cup final at Wembley.

It’s in a quiet corner of a once vibrant Halifax pub that I meet up with Mick Scott.

The Plummet Line was home to Halifax fans of the ’80s and ’90s. It was, for many a year, the place where hordes of Fax fans would eventually stumble into after an evening of drinking following games at the now-departed Thrum Hall ground.

Halifax players would often frequent it too, with one of the keenest enthusiasts being the club’s Hall of Famer Scott, who was more than happy to catch up with Rugby League World in the dated alehouse.

“I had many a drink bought for me in here,” he said.

It’s over a pint that we sit down and discuss Halifax’s greatest ever period, 30 years after Scott and co triumphed at Wembley to win the 1987 Challenge Cup final.

But before rugby hits the top of the agenda, Scott has many tales to tell about his evenings in Halifax town centre.

“This place used to be packed after a game,” Scott said, as he looks around an establishment that struggles to get the customers it did back then due to the emergence of various rivals scattered across the town centre.

“There were nights when the fans had to pick us up and crowd-surf us into the pub so we could get in.

“Thankfully there would always be a fan at the bar more than happy to buy you a beer. They were great days, we had some wild nights in here and the fans loved it, and all of the team did too.”

Scott’s stories range from the time one of the players was caught hanging from the ceiling to the one about the unfortunate fan who agreed to buy Graham Eadie a pint for every try he scored.

“He was a lot poorer for that agreement,” Scott chuckled.

“Graham would come in after every game and he never had to buy a beer.”

Eadie was arguably the standout star during his time in blue and white, and winner of the Lance Todd trophy in that 1987 Wembley triumph. Although he came to West Yorkshire at the end of his playing days following a legendary career at Manly, he was still a world class talent at the grand age of 33.

Eadie’s contribution to British Rugby League was his involvement in a Halifax side that had seen Australians join the club en masse.

“We were revolutionary in that sense,” Scott said.

“At the time the number of Aussies playing over here was very, very low. But then in 1986, we had six or seven in our team and it had just never been seen before.”

Indeed, Fax recruited heavily from Down Under.

Grant Rix, also known as ‘The Fox’ for his distinctive ginger hair and moustache, was one of those. He had once been touted as the next Wally Lewis, somehow, he ended up in Halifax.

The captain was Australian too. Chris Anderson is still regularly mentioned on the terraces of the Shay to this day. Despite spending less than three years at the club, he is still regarded as one of their greatest ever players.

The grunt within the side was largely exerted by the man known as ‘Cow’. Grant Neller joined the club at the same time as Anderson in 1984, part of the first batch of Australians recruited by a key component of the club’s trophy-laden decades, chairman David Brook, who sadly passed away in 2006.

“He was the life and soul for us,” Scott said.

“He’d always join us in here and he would give his post-match speech in here. He’d get on the table and talk to everyone with a pint of hand. He’d always end by telling us all to keep smiling, no matter what the outcome on the day. That became his catchphrase.

“When all these Aussies started coming over the whole town was going ballistic. It wasn’t the norm back then. You’d consider a Lancashire lad as an outsider, never mind an Aussie.

“So with all of these lads coming over in the ’80s, it was really controversial. The fans were going mad but when we started winning things everyone stopped caring.

“Birdie would end up being the talk of the town because he kept telling the press that another world class player was joining and everyone would be guessing who.

“The Aussies loved it over here too. I don’t know what it is, but since they all started coming to Halifax, they’ve all loved it. Even the overseas lads at the club now like Adam Tangata can’t get enough of it.”

But while the aforementioned tourists added the glitz and glam, it was a strong British contingent that made up the spine.

There was Colin Whitfield, the goal-kicking back often remembered for his graceful running and habit of entering the field at the last possible moment before kick-off.

Seamus McCallion was a ‘proper hooker’ who had a knack for scrummaging.

Who could forget Wilf George? With thighs the size of tree trunks and the force of a truck, the Fax flier captured the hearts of supporters and earned a cult status very few, if any, have ever managed to surpass since.

As a team, they forged a unity only teams of champions possess.

Perhaps their finest accomplishment was winning the Championship a year before their Challenge Cup success. A 13-all draw with Featherstone on the final day was enough to secure them the title. To this day, there is still a feeling of scepticism around the outcome of that match, given that, coincidentally, Featherstone needed a point to avoid relegation. Scott laughed when questioned.

However, some 30 years on, it’s their triumph at Wembley that is remembered by wider Rugby League circles.

“What a day it was to be involved,” he said.

“I remember it well, just little things before the game. I remember John’s tackle on Elia. That was just him doing what he always did in truth, and then he goes and slots a drop goal.

“We were a great team. It’s a shame the club hasn’t seen anything like that since.

“And let me tell you, I doubt this pub has either after we came back to celebrate.”