GED STOKES (pictured) is one of many from the Southern Hemisphere who has been faced with the daunting task of taking a young family 12,000 miles to take up a job in British Rugby League. His wife Deb and 12-year-old son Ben joined him on his Cumbrian adventure in 2004, settling in the beautiful Lake District town of Cockermouth, nine miles from Workington, where he would be coaching.

Stokes was a fearsome player in his day, touring Australia and Papua New Guinea with the Kiwis in 1982. A year later he accepted a playing contract with Workington but arrived with a badly damaged finger, not wanting it to be operated on before the end of the season so he could carry on playing. As a result, he had to have the finger removed at the end of the year. On team photos, Ben has been known to curl up a finger in tribute to his dad.

A couple of days after watching Ben win man of the match in the Cricket World Cup final, Ged reminisced with Rugby League World about those early days in the north of England with his wife and reluctant son.

He played everything. Outside school, he played cricket and rugby union for the town and Rugby League for Broughton Red Rose, a great amateur club in its day.

Coming halfway around the world with your family isn’t easy, so accepting the Workington job in 2003 when I was touring England with the New Zealand ‘A’ team was a big decision.

Ben was just 12 and it was obvious he was a very talented cricketer and rugby player. But he didn’t want to come! His life was in New Zealand and he didn’t want to give that up. His mum, Deb, did a deal with him. If he didn’t like it, we’d come home after a year. I still remember dropping him at Cockermouth School for his first day. When we picked him up, he said he’d enjoyed it. He’d already made friends. It was a relief.

He wasn’t a natural in the classroom, but he never bunked off school. He even did his work experience with Durham County Cricket Club, which worked out pretty well! He loved the Cockermouth life. It was such a good sporting school. He played everything. Outside school, he played cricket and rugby union for the town and Rugby League for Broughton Red Rose, a great amateur club in its day. He was a fullback or halfback in Rugby League. At 14, he was in the England system, but he had to choose between the sports at that stage.

When I was sacked by Workington, the obvious thing to do was to go back to New Zealand. But we couldn’t because Ben’s career was at a crucial phase. We couldn’t jeopardise that. We’d both lost our income because Deb also worked at the club on the lottery. We could barely scrape enough together to pay the rent. Then there was a legal case with Workington, and they always cost a lot. As far as Rugby League was concerned, I kept my hand in by coaching the Cockermouth Titans amateur club and also the Serbian national team. I was also involved with England on the regional side of things. It was very good for me to be involved at those levels. Then the Whitehaven job came up, and I went there.

Ben’s cricketing talent had always been evident. He could play the perfect straight drive when he was still in nappies. I wish smart phones had existed then so we could have recorded him. Deb and I also played cricket. She would take him to her game, and I would go off to mine. Coming from a sporting family must have helped him, but we’re a long way past the stage where Deb and I can advise him on cricket!

Since his career took off, we’ve loved the summers in England or winters elsewhere. The ECB [England and Wales Cricket Board] treat the players’ families brilliantly. I’ve also been over to the IPL [Indian Premier League] for his last three stints there.

Ben’s done it tough over the last couple of years with the well-publicised court case following the incident in Bristol in 2017. We always knew much more than anyone else did about what really happened. It took a long time for the not-guilty verdict to be reached but it was still a relief when it was reached. In the meantime, people were quick to make judgements and some very good journalists were too quick to jump on the bandwagon and made some very silly determinations. The video that ended up in the public domain was selective and doctored. Nothing good happens at 2 o’clock in the morning but we knew what had happened. It was very difficult for Deb and me as parents but imagine what it was like for Ben. He held his head up high and he bounced back.

The World Cup Final was wonderful. I was misquoted about who I wanted to win. People said I was supporting New Zealand but that wasn’t true. I’d have been pleased if Ben had played well and New Zealand had won but you don’t have to be a rocket scientist to realise I wanted my son to win the World Cup. Ben’s still on Cloud Nine and so are we. Even though New Zealand lost, everyone here is still talking about it and watching the replays. Deb and I have been doing media interviews all week! I’ve had some comments at work, but it’s all been good natured.

The game was unbelievable. There were no losers – literally, because it ended in a tie. When Ben attempted to hit a six in the penultimate over, I had a feeling that it would fall short but that the fielder might step back onto the boundary rope. That’s exactly what happened. Sometimes you just know. Some incredible things happened that you would never usually see. But the gods were smiling on England. Allah was on their side as Rash [Adil Rashid] said. It was their destiny to win. But hopefully the New Zealand players will look back and realise they played in an all-time classic that will be talked about forever. 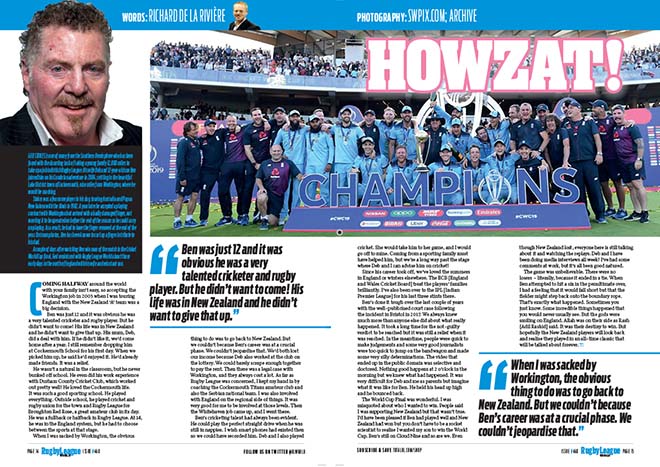