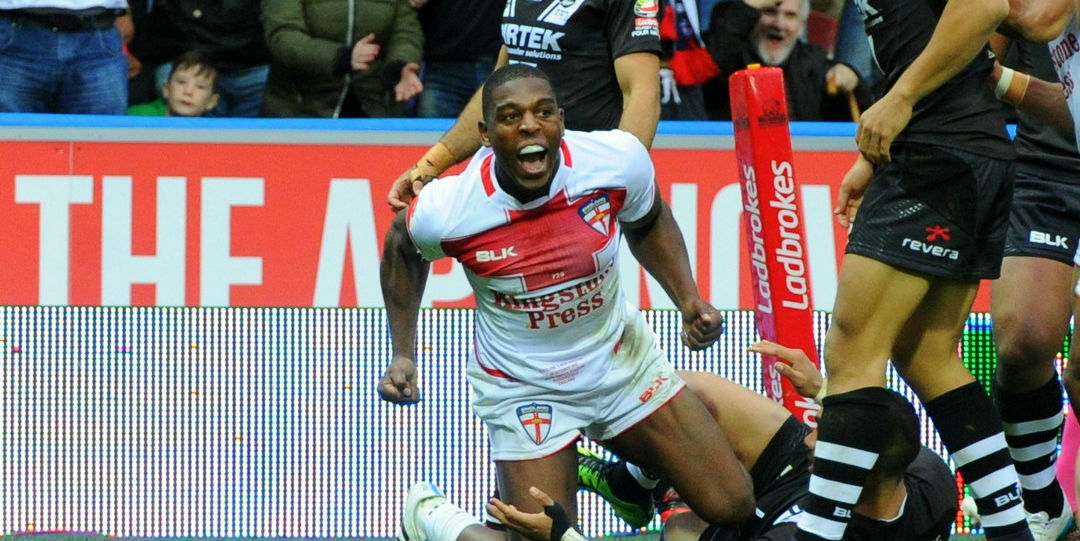 England and Huddersfield Giants wing sensation Jermaine McGillvary steps up to answer questions from the Rugby League public. And it all kicks off with a leading question from a former team-mate…

@keithmason106: Who did you look up to most when I was at the Giants, Jerry?
There was a few. David Hodgson. I was new to the game. When I came into the first team, he taught me some smart stuff on my positioning and how he knows when the halfback is going to kick the ball. Keith Mason was somewhat of a freak. One of our conditioners when I first came said that he could be an elite triathlon athlete because he was just so fit. I don’t know how he was so fit. I was trying to get bits off of everybody whether it was watching Keith and how he did his fitness or Dave Hodgo and Robbo (Luke Robinson) and Kev (Kevin Brown), talking to them and spending time with them at training. They took time out of their persona training sessions to help me.

@ellie_bsmith: Funniest team mate at the club?
Shaun Lunt was up there, Luke Robinson. Even Jamie Foster for a couple of weeks. They’d go for anyone or anything personal, any defect you had. You couldn’t even have nice trainers or a fresh haircut without them ripping you. They were good around the place and good for team morale.

DoubleD: Will you be taking on the mantle of the cowbell when you retire?
No, I’ll leave that to the real die hard fans. I don’t think I’m up to the task of ringing that cowbell. I’m not worthy.

Manx RL: Chips or rice?
Rice all day. I don’t really like chips.

DoubleD: Who’s the best player you have played with and against?
With: There have been some legends like Luke O’Donnell and Brett Hodgson, Luke Robinson, Eorl Crabtree. I couldn’t name one to say they’re the best. Kev Brown, Jamahl Lolesi. The best player I’ve ever played against would be either Greg Inglis or Johnathan Thurston. They were quality. So were the players I’ve played against recently but just because of their legendary status, it would be one of those two or Cooper Cronk.

Old Frightful: If selected, would you love to get the chance to have another bite at the Aussies?
It was so heartbreaking last time. At the next World Cup, the guys that are going to be there, especially the younger players that are coming through, I believe they can do it on our home patch. It’s all against you when you’re in Australia. The next day, I wanted to play against them but they’re a quality outfit. They’re the world’s best for a reason. When you play against them, you soon see why. They hardly make any errors and just grind you and grind you and grind you down. We weren’t too far away but the next World Cup is ours.

Copa: If you could change one rule, what would it be?
It would have been that one where people were throwing the ball at each other but that’s been changed now. Rules wise, it’s pretty good.

latchford albion: Have Leeds made you an offer to play in the halves?
(Laughs) I’m available if they want me to play in the halves only! Nah, you know what, Leeds are still a massive club. With the players that have left in the last five years I don’t think they’ve replaced one. Peacock, Burrow, Leuluai, Sinfield, they’ve not replaced and that’s why they’re where they are. But they won’t be down there for long.

The Future is League: What can be done to get more people from the Afro-Caribbean community playing Rugby League?
For me, I didn’t even know about it. I was just playing on the street one time. My mate and his Dad were going to the rugby training. They asked me if I wanted to go so I did. I think it’s more about awareness. Especially in my local community, not enough people know about Rugby League. I used to walk to training but at nine years old, I didn’t know about it. If more and more clubs actually get out into the community instead of just putting stuff online. Have a word with parents, make it a friendly club environment so they know who you are and what you’re about. When I finish playing, that’s probably something I’ll look in to. Tap into Huddersfield’s ethnic community.

DoubleD: Were you tempted to play in the NRL or did the fact that your son is part of Man City Academy make that a non starter?
You’ve hit the nail on the head. For anyone, it would be a dream and I’m no different. But at the end of the day, when you’ve got a son who is doing fantastically well, for the sake of two or three years of my career, to sacrifice his would be pretty selfish of me. We’re seeing the benefits now, he’s signed up and doing extremely well. He’s been abroad more times than I have in my life, been to destinations that I’ve never been to. My decision is validated. The reason I’m still playing is for my children. It’s not that I absolutely love the game, it’s so they have a good future. I’ve had to sacrifice moving clubs within my career for him as well. I’ve had opportunities to leave. Huddersfield have looked after me, when I’ve been tempted to move, they’ve always given me good packages which have looked after me financially and they’ve always signed me up long-term. I have to thank Ken Davy and his late wife Jennifer for that.

Sparse Attendance: Do you watch that other code?
Little bits. I love watching New Zealand because they play more like Rugby League when they pass it around. Not much though.

Doc: Have you ever been tempted, or had offers, to leave Huddersfield for another Super League club?
Yeah, I’ve had loads of opportunities. I’ve met with clubs and spoken with clubs. It’s over the Pennines and would have to move there. I’ve got kids and a house, it was stressful for me to do that so I’ve always stayed put.

CharlieRL: What stadium has given you the best match atmosphere?
Without a shadow of a doubt it was the World Cup semi-final against Tonga. The best atmosphere ever. I’ve been to baseball matches, football matches, rugby matches. I’m not joking, the ground was shaking. You couldn’t hear the person next to you. I don’t think it’ll ever be topped. I don’t think I’ll ever see it in my lifetime. Some of the best fans I’ve ever come across.

@championship_rl: Who would be your ideal celebrity dinner guest be?
That’s a good question! Maybe Steven Gerrard. I grew up loving football and he was he top player in my era growing. He was a class player and he’s turning out to be a top manager. I’d ask him loads of questions about his winning goals and ask him how he felt.

First published in Rugby League World magazine. Get the latest issue, on sale now, to read this month’s Quickfire Q & A with Leeds Rhinos star Brad Dwyer! Click here for more details on what’s inside the mag and how you can get a copy.