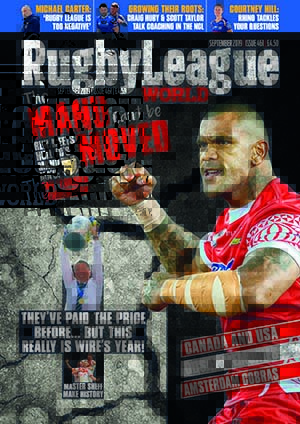 Click here to find your nearest local stockist (UK/Ireland only)

Click here for the online edition to read on PC/Mac, smartphone, tablet etc

ASK YOUR LOCAL NEWSAGENT (UK ONLY) TO RESERVE YOU A COPY EVERY MONTH!

The terrifying presence of the Tongan Terminator, Manu Ma’u dominates our cover this month, as he will surely dominate opponents in Super League next season when he joins Hull FC. Matt Shaw was brave enough to tackle him for an exclusive and searingly honest interview inside: you won’t want to miss it!
We celebrate all that’s great about Rugby League in our Wembley Weekend special feature, with Warrington Wolves and Sheffield Eagles triumphant in the Challenge Cup and 1895 Cup finals, plus the Friday Night Lights at London Skolars and the London 9s.
Given this embarrassment of riches, we try to discover why Rugby League fans always seem so miserable about their sport in our latest Talking Point.
Another notable Rugby League hardman, Ryan Bailey is contemplating a return from retirement and we chat to him to find out why.
We also meet the Hardmans, Rugby League playing couple Ian and Amy.
Leeds Rhinos Challenge Cup winning women’s captain Courtney Hill answers your questions in our Quickfire Q & A and we also look back at a sensational day for the women’s game in Bolton.
We’ve got two Great Scotts! Scott Taylor talks to us about the rising number of Super League players giving back to the grassroots of the sport in the NCL and Scott Naylor reminisces about his Bradford Bulls days playing at Odsal as the famous old stadium looks likely to host Rugby League for the last time.
On the international scene, we’ve got stories from Italy, Lebanon, New York, Amsterdam and Canada plus our regular coverage from Wales, France and Australia.
There’s a lot more besides, including our Team of the Month selections and a Combined XIII from the northern powerhouse of Leeds.

In shops across the UK from Fri 30th Aug, or download the digital edition at www.totalrl.com/rlw from Thur 29th Aug – Also available by post and on subscription worldwide from www.totalrl.com/shop

Rugby League World Magazine is your ‘access all areas’ pass behind the scenes of the world of Rugby League.

Every month, packed with the colour and detail behind the news with views and analysis from the sport’s leading writers and personalities. Rugby League World is essential reading for anyone who cares about Rugby League, wherever and by whoever the greatest game is played.

Established in 1976 as ‘Open Rugby’, the magazine adopted the title Rugby League World in 1999.

Rugby League World is widely available from newsagents in the United Kingdom. It is also available on postal subscription in the UK and worldwide.